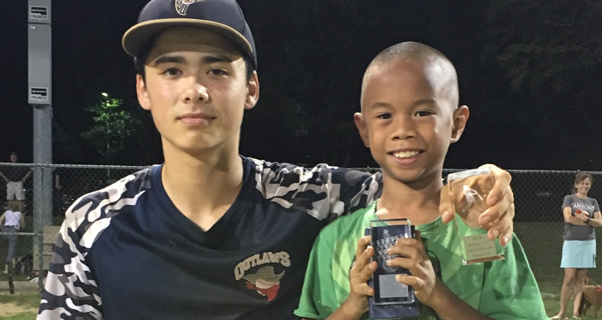 I have two sons, one by birth and one by adoption. They both love baseball; but their baseball stories could hardly be more different. My birth son’s love of baseball came easy. It’s a simple story: I love baseball and from the day he was born, I shared my love with my son. He took to it like hand to glove.

Ethan, our adopted son, was introduced to America’s pastime after we adopted him from the Philippines in the Spring of 2016. His love for baseball has not come easy. Then again, as we are learning with Ethan, nothing comes easy. The story I want to share isn’t about baseball. Baseball is just the context for the much bigger story—about God’s grace to an orphan and to an adopting family.

It’s the bottom of the final inning in the championship game of the season-ending playoffs. The score is tied 5 to 5 against the undefeated and favored opposing team, and my son, William, is on the mound to try and get three big outs so we can take the game to extra innings and hopefully on to victory! In order to even get to this situation, our team has had to win 4 straight games the past 2 days. William has already pitched 6 innings the previous day. But the coach put the ball into his hands to get us to extras. Unfortunately, things go quickly south. The first batter gets on by a fielding error and then proceeds to second and third. With the infield and outfield drawn in (to hopefully get the runner out at home) the next batter gets the walk-off hit over the rightfielder’s outstretched arm. The other team mobs the field. Game and season over. Dejection. But there’s another part to this story happening alongside the hitting and fielding: Ethan is the batboy on William’s team.

Let me be clear: being a batboy for a high school team is not glamorous (think: Summer heat mixed with sweaty adolescent boys). It’s not like you get to hang with Andrew McCutcheon or Bryce Harper. It could be fun—if you really love the game. But Ethan came into his role as batboy for William’s team on account of William’s love for baseball, plus the fact that he was the little brother. Understandably, when Ethan first began his batboy duties he did not know a thing about the game. However, in theory, batboy duty should not be too difficult: run, get bat, bring bat back to dugout. Repeat. However, with Ethan, this is no small thing and nothing comes easy. When he first started his batboy duties, well, let’s just say it wasn’t pretty—constant complaining, goofiness, distractions, senseless chatter – lots of Ethan! But the coach and the boys on the team embraced him and we kept encouraging him to stick with it (though at one point he did quit and then regretted it). Fast forward to the championship: Ethan was on his batboy game – running, working, pumping up the team! We were thrilled and somewhat amazed.

At the completion of a tournament the players line up for the ceremony to receive their first-place and runner-up trophies. The parents and fans stick around to applaud the great effort. As can be imagined, this was a bitter-sweet award for William. But we applauded our son with gusto. Then something amazing happened. After each player was called up by name, Coach Ernie – much to Ethan’s surprise and delight – called his name to come forward to get his trophy, as part of the team! It was so unexpected. Ethan’s face radiated surprise and joy. On the ride home, Ethan put it into perspective. He told us, “This is my first trophy and first time my name has been called to receive an award” and he began to cry. He kept saying, they (the team) trusted me (to be the batboy). Suffice it to say, Erin and I were deeply moved. But as you might have guessed, there’s more to this story.

The thing you need to know about Ethan, that we are still coming to terms with and seeking to understand, is that he has been diagnosed with Fetal Alcohol Syndrome (FAS). This is, of course, in addition to the adoption issues that come with the territory of being an orphan for the entirety of his eight years prior to entering our home.

When we first began the adoption process we were told that Ethan had been clinically diagnosed with ADHD, that he was having a hard time flourishing—physically as well as emotionally, and that he had a tendency towards self-pity and outbursts of anger. All of this made sense in light of what we knew of his history. While Ethan was well-cared for in the home for orphans in which he grew up, he had been abandoned at birth, knew nothing of his birth parents, and more recently and traumatically, was rejected by a prospective adoptive family at the final step of the adoption process, when he was six years old. We were aware he was a mess, but not more so than the typical eight year-old orphan child. We were very mistaken.

The first few months with Ethan had its precious moments, but if there was a “honeymoon” period it was over within a couple of weeks of his arrival. Instead, it was characterized by constant confusion and frustration that instead of improving over time, got worse as the months progressed. What we saw was ADHD, but something so much more severe. We wondered if it was autism. Was it low IQ? We certainly considered the relevance of mischievousness mixed with extreme selfishness. But it wasn’t until someone suggested the possibility of FAS that things started to make sense. And while that helped to explain things, it didn’t make things easier in terms of dealing with Ethan’s needs and behavior.

To give some basic background on FAS, what is now known from scientific research is that when alcohol is consumed while pregnant, there is proven damaging effects (depending on timing, quantity consumed, and genetics) upon the brain and Central Nervous System of the developing child. Alcohol easily passes unprocessed through the umbilical cord, and acts as a powerful poison that retards brain development in the unborn baby. While the cognitive and behavioral effects can vary case-by-case, it typically shows up as the inability (or underdeveloped ability) to make logical, verbal, social, and emotional cues and connections. It is constant mental misfires that the normal brain gets and develops over time. For my wife, Erin, and me, having a child with FAS has been the most difficult challenge we have ever faced. It has tested our love, our patience, even our faith in ways we could not have imagined prior to this adoption. But this is only part of the story.

To be real, Erin and I have many times over asked God, why? Why us? Why this? Surely, we didn’t need this on top of everything else in our lives (including six bio kids with all of their issues and the start-up of a challenging new church plant). But – once again – we are coming to the place of being able to say, God’s thoughts and ways are higher than ours. While this is not what we asked for or what we were expecting, it is exactly what the Lord has for us…and for Ethan. God is teaching us all so much through this process. To give one example, I had no idea how limited and shallow my love was until it was examined in my battle to love Ethan. Yes, this has been a hard revelation, but one that I am glad to be shown (most of the time:). Another dad who recently adopted put it this way:

This child, broken and sad, consumes all of my affection, all of my attention, and then looks me in the eye and tells me it’s not enough. Meanwhile, my son and daughter get the fringe of my parenting, the scraps of my time, and they tell me “Everything is fine, Dad. It’s okay.”

I know they’re all lying. One lies to protect his heart. The other two lie to protect mine. It’s infuriating and heartbreaking all at once. One hand wants to pull him close and love him, the other wants to push him far enough away that he can’t hurt you anymore.

But it’s not his fault. He’s broken. Shattered.

So you breathe in, hold it, and exhale through clinched teeth and tears, and promise him, “I’ll love you in pieces. You don’t have to be whole.”

And you recognize that it’s not you who’s loving him like this, but rather Christ through you. So you hold him closer. (Jon Mays)

In retrospect, this is the very kind of love I have asked God many times over to help me learn. It took Ethan to kick start the process.

God is doing so many things through this adoption. For sure, we are also seeing progress with Ethan. After the baseball game, when we were home and Ethan was heading for bed, he came downstairs and thanked Erin and me for helping him stick with being the batboy. We were blown away by this – his connecting all the struggles and perseverance with this result.

The next day, I sent an email to share what happened and to thank Coach Ernie. He replied:

Thanks for the kind words. You brought tears to my eyes as I read your email.  It is truly my pleasure and honor to have your family be part of the team.  I am so happy for Ethan and will cherish the picture (above) for the rest of my life.

What you and Erin do for Ethan and the community is a testament to 2 amazing people and what a difference you have made in so many lives including mine.

Never change and keep up the GREAT work.

Once again. Blown away. This too was so unexpected. But we are coming to appreciate how our God, who called us to this adoption, is also walking with us in sweet, surprising ways to show us his love for us and for Ethan. We are family.

I’ll conclude with this photo of the brothers by adoption. It pretty much captures my two boys.

by BK Wikner (in case you are wondering, I also have five daughters, who are also uniquely wonderful and somehow feel so much easier than my two boys)